When I first started publishing back in 2008, there were few options for indies. I did all the research. Well, let me back up a bit. Before that, I first spent years trying to go the traditional route, querying literary agents and submitting manuscripts to publishers (many of which did not accept unsolicited work...hence the need for an agent), only to be met by rejection. Enough rejections and any person (me) will get the message. Still wishing to become published, I eventually turned to self-publishing (sound familiar?) and found a serviceable and user-friendly Print-On-Demand platform in Lulu Press. Imagine the excitement of holding a physical copy of your debut novel. Yeah, sure you can.

Now, fast-forward to the present and things have certainly changed. The industry has changed. The mediums have changed. Back then, many had skepticism about self-publishing. Writers had always been taught to strive for that big fish in trad publishing. It was validation of all the hard work and hours and blood, sweat, and tears put into your craft, honing it. If you were picked by a Big 5 or Big 6, it meant that you were good enough. If you were not, it meant that you were not...at least that was the presumption. We now know differently having witnessed several indie writers who were dismissed by traditional publishers go on to become bestsellers and make gazillions of dollars (hooray for the indie writer). Back then, too, print was still the way to go with the slow emergence of digital format (ebook).

Today, the ebook has now hit its stride and the market has flourished with indie publishers. While this is great that authors and writers have taken matters into their own hands to share their stories with the world, this also means that with such growth comes saturation and visibility issues. How do you get yourself noticed when you are but a small fish in a big ol' pond full of tens of millions of other fish, some much larger?  This is especially a concern now that methods used to promote and market some four or five years ago are becoming less effective. Does this mean that indie writers and publishers will constantly have to reinvent themselves to keep up?

What will be the state of indie publishing in the next five years? Will people begin to drop out of the race because the disappointment is too great? Will there be a continuous churn of indie publishers as a result of these less favorable trends?

Too many opinions! Too few who want to hear them!

Everybody, I mean, everybody has an opinion, and usually it's negative. When did it become okay to spout what you feel all the time? Someone takes a nice vacation, and you've got a problem b/c the economy is shot and not everyone can take one. Somebody writes a human interest story and you're griping b/c a period is missing or b/c the links within the article are invalid. Give it a rest already. What happened to: "If you can't say something nice, don't say anything at all?" What ever happened to that little nugget, huh? Oh, and yeah, I get it--freedom of speech and expression and all that jazz. Yeah, yeah, save it. Some people only thrive when they are negative. Maybe it makes them feel empowered or something. Who knows. I just know that when a person posts pictures of their new baby nursery, filled with excitement and glee, and the negative comments start rolling in about their indifference or dislike of the wallpaper or color palette, something ain't right. It's a new little being come into the world, people. That's worth celebrating! Bask in that mother' or father's happiness. Who cares if you don't like the changing table.

I don't know--just keep it to yourself sometime. I know it's your right, but that doesn't mean it's "alright" to blast in cyberspace. Geez.

And yes, this, too, is an "opinion" I'm expressing about the notion of negative opinions. Isn't life ironic?
at August 19, 2010 5 comments:

Ode to the Unspired...

For some reason or another in our lives come the dry spells or patches. Perhaps we've suffered a personal tragedy or setback. Perhaps inspiration has sought out another only to later return. Perhaps there are a million reasons why we are left uninspired to do anything. However, like the changing seasons, so, too, come the ebb and flow of things. What seemed a tideous effort to find inspiration would no longer be a toil. You will want to get out and do something like work in your yard or clean out your gutters or see people or read a new book. You'll feel that zest for life, for living, for renewal, and that's a good thing.

Why is Tasha Making Me Look Bad?

Don't you just hate those people who make you look bad without even trying? They are just going on about their lives, being inspired, but it only makes you take a good, long look at yourself. It makes you reflective and ask the questions--"What am I doing? What have I been doing with my own life?" After the reflection comes a bit of annoyance. You're now asking yourself: "Why is Tasha making me look bad?" Tasha is no one in particular or maybe she is. Maybe she represents all those people who are inadventently making you look bad by being so clever and witty and inventive and creative in their own lives while you are doing gawd-knows-what with your own. Well, newsflash--Tasha, take it some place else!

When that day comes when you're not looking so good, here's hoping someone doesn't come along and rub it in your face!

Disclaimer: This is all in good fun. I was inspired to be a bit naughty. I have no beefs or grips with anyone, least of all Tasha (whoever she is--wink, wink).

Email ThisBlogThis!Share to TwitterShare to FacebookShare to Pinterest
Labels: reflection

(From my poetry book, Wandering Places)

Single-level brownstone,
Flickering neon,
A shortage somewhere in the main line,
“That gives it character,” someone offers.
Gargantuan glass entry way for the
Larger-than-life night owls;
Big tippers, big spenders running up tabs
Into the next year, entitled to their own table,
Their names carved into the back of chairs;
Regulars, they have come to be known,
Receiving the special V.I.P. phone call
When some new act is in town.
It’s no exotico, but the music’s good.
Dimly lit booths are the perfect ambiance
For a sneaking glance or a lover’s dance.
Isn’t that what it’s all about--the romance?
Yeah, that’s exactly what it’s all about 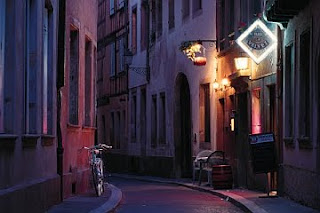 When I first started publishing back in 2008, there were few options for indies. I did all the research. Well, let me back up a bit. Before ...